Stirchley’s very own Kolkata Lounge was presented with an award from Selly Oak MP, Steve McCabe after being named as a West Midlands Runner up in Parliamentís annual Tiffin Cup competition.

Steve nominated the family-owned restaurant last year after asking his Facebook followers for their local recommendations. He received lots of worthy suggestions but in the end, it was Kolkata Lounge that came out on top.

The restaurant was opened in 2007 and has firmly established itself as a local favourite. Owner, Ameer Hussain told Steve how he and his brother, head chef Shah Hussain, carefully selected their menu to reflect authentic Bangladeshi cuisine. They also took the opportunity to show Steve the recent revamp of the restaurant. Steve presented the brothers with a framed certificate and the all-important Tiffin Cup Chef Whites to mark their achievement. 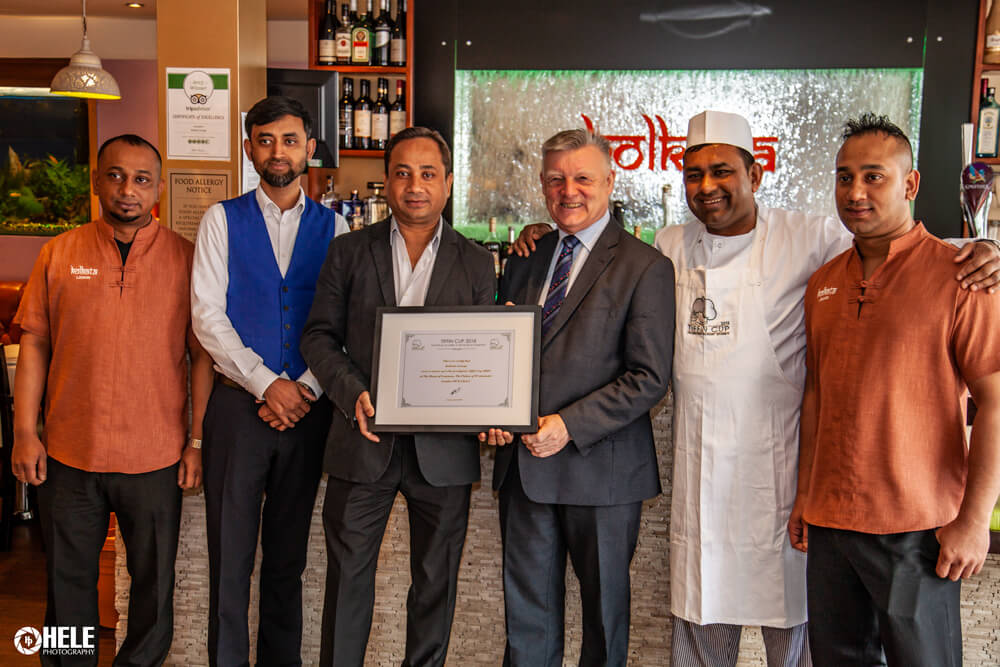 It was a great honour to be nominated for this competition by local residents and we were thrilled to be named as runner up for the West Midlands. I have worked in the restaurant industry alongside my brother since I was a teenager and we have always focused on offering quality authentic Bangladeshi cuisine. Being a family owned business means we really care about the restaurant and the food we serve.

I was very pleased to present Kolkata Lounge with an award that recognises their well-loved cuisine. My constituency has many brilliant South Asian restaurants but this year, Kolkata Lounge came out on top. I’m glad the judges highly commended Kolkata Lounge and recognised the quality of South Asian food they produce, Iím looking forward to another visit there very soon.

"Me and my partner come here for all special occasions and meals . The family are excellent with us full of banter and tips on trying new meals. We recommend this place to lots of people and urge you to try their excellent cuisine."

"Best place for an authentic Indian cuisine. The staff really friendly and knowledgeable as this is a family business. Each te I go I discovered new foods with their recommendations and each time I enjoy it. Highly recommended"

"Fab curry house, the food is so tasty Really decent price. The staff are really friendly and helpful. Can be busy, so reserve a table. You can just pop in and they'll always try and fit you in 😀"

"First time here and me & my partner absolutely loved it!! Staff were friendly, food was delicious great portion sizes and great prices. 2 starters, 2 mains, 2 sides and 3 alcoholic drinks 46£. Definitely will be back. Booking is advised as it can be busy! Xx"